Shanghai to Samarkand and The People We’ve Met

When traveling you get to met people from every walk of life with all kinds of beliefs ranging from the mundane to the insane.  In Samarkand one evening, Mike and I were sitting on the benches in front of the Registan people watching. We watched dozens of people try to sneak in without paying, all but two were caught by the guards. While we were watching an eight year old boy and his two friends walked by, the most flamboyant of them walked past, stared at me and said, “hello, baby!” We burst out laughing, but the boy was not amused, he took a seat next to Mike and proceeded to talk to him in Jar-Jar Binks tones, not saying anything but rather making noise, all the while he winked and nodded his chin at me.

In Kashgar, Xinjiang we were sitting in the courtyard enjoying the local tea when a very sick looking French man approached us and reported that he was recently quarantined in a hospital for people with suspicious illnesses. He then stuck out his hand for us to shake. 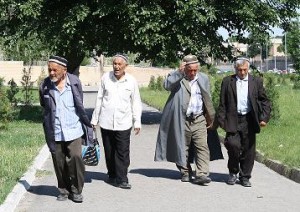 In the tomb of Tamerlane in Samarkand I was sitting alone in the corner trying to ease drop on a local woman giving a guided tour to an elderly man in English. A young girl came up to the old man and asked where he was from, whereupon he launched into the following: “I’m from a tiny island called Britian. We are a monarchy, our queen is the only queen and she rules many countries.” The little girl walked away and I burst out laughing again while the Uzbek guide glared at me.

In Urumqi we were taking a break in the hostel one rainy afternoon and put in a DVD while we were doing some writing. A young man traveling from Israel sat down to watch with us. We were watching, ‘Charlie Wilson’s War.’ At the end the man asked what we thought of American policy back then.

In Kashgar we were sitting at John’s Café after arriving, having starved on the train for want of variety. We encountered two Australians eating alone who invited us to join them. Conversation twisted and turned, but throughout we discovered that the two Aussies had travelled the globe in the 40 years on the planet, including 3 separate excursions to Antarctica.

Walking down the streets of Samarkand a local with all gold teeth approached us and said, “hey guys, where ya from?” We were so shocked to hear English with an African American accent come from this man that we stopped dead in our tracks. He looked straight at Mike and said, “yeah man, I used to live in New York, I drove a Cadillac. P.I.M.P, man…. Yeah, I had lots of black friends.” He actually spelled out pimp. Here is the clincher- he is the city’s foremost English instructor. Perhaps he taught the eight year old to greet women with a feisty “hello baby!” and a wink.
Also in Samarkand we met two Spaniards biking from Spain to south-east Asia by land. These interesting folks had really seen the countryside, the cities and were doing an A-rate, year-long trip. There is no funny story here, but this folks were just plain fun to talk to and hang out with. They had met an Italian economist who we spent dinner with the following night, another very interesting fellow.

Sitting at the hostel for breakfast one morning we met a man of about 27-29 who was living in Samarkand for a year cataloging the archives at the regional museum. He spoke Uzbek, Russian, English and could read Arabic and Persian. He was the most quintessentially British person I’d ever met, because although it was 90 degrees outside he was wearing a button-down shirt and a sweater vest.

We have met several other, very interesting people on the trip so far, this is just a taste of the type of people one encounters when traveling the world. Its amazing the stories we hear and the lives some people lead and these are the moments that make one realize that our lives are so much more than everybody’s quest for life insurance and a good job.