Sinop, A Taste of the Med on the Black Sea Coast 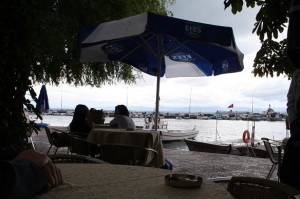 Trabzon and the magnificent hanging monastery of Sumela disappeared in the distance behind us as we boarded yet another bus heading West. Our goal was to go from Trabzon’s main bus station to the Samson station, half way to Sinop along the Black Sea Coast. For better or worse we arrived in Samson behind schedule at midnight and discovered that there was no minibus into town. The bus station was in the outskirts of Samson, and we were not in the mood to spend money and time getting to a hotel just to wake up early to catch another bus. We hastily pitched our tent near the bus station in a field next to a row of wind-break trees. It was dark, creepy and ominous not knowing what else was in the field, but since the frogs and birds were chirping it became a soothing kind of nature as we quickly jumped in the tent and fell asleep.

We awoke to the sound of barking dogs, the only concern in my mind. People you can reason with and explain that we were just camping on their property for the night—you can’t reason with a drooling dog. A farmer emerged through the field and called the dogs off of us just as I was reaching in my bag for a blunt object to protect us with. The farmer simply walked back through the corn stocks and we headed towards the bus station. It was 7am, and our bus, we discovered, left at 8:30.

After a light breakfast we were on another bus heading West….a déjà vu kind of feeling. Sinop was our destination and we had heard great things about the small coastal town. I caught up on my sleep and we arrived by early afternoon and checked into a pension. The owners were two friendly old men who gave us a discount simply based on how pathetic we looked. We cleaned up, showered and changed out of our camping clothes and reemerged to startle the proprietors, who hardly recognized us in our new and clean state.

Sinop was bustling with activity, and we quickly followed the noise towards the harbor, where people of all colors were drinking tea, playing chess and backgammon and smoking. We grabbed a table at a harbor-side café and had a few beers while we watched the fishermen haul in their catch. With Ramadan over, people around us were snacking and we jumped on the bandwagon and headed off to find food of our own. 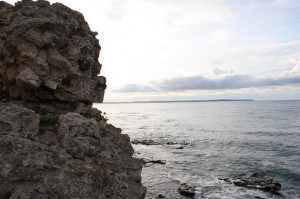 Mike succeeded in finding beers, which he bought to drink on the harbor. I found some juice and we sat on the dock dangling our feet over the side playing cribbage and watching the sunset.

Because it was such a restful place we were tempted to stay another day, but having made arrangements to meet a friend in Ankara, we had to push on. We checked out of our friendly Pension and waved goodbye to the two proprietors who had been so kind. We took a local bus to the long-distance bus station and boarded yet another bus, this one heading to Kastamonu, mid way between Sinop and Ankara. But we had other plans in mind, at Kastamonu we got on another bus to Safranbolu, and ancient Ottoman town that has survived intact to this day!

2 thoughts on “Sinop, A Taste of the Med on the Black Sea Coast”