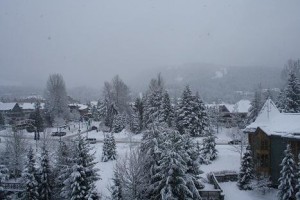 For Christmas this year the family went to Whistler, BC, Canada to check out the slopes for the upcoming 2010 winter Olympics. Though it rained fiercely in Whistler, the summit was a blizzard of snow and fog. We jumped in the gondola and rode for what seemed like half an hour before reaching the summit. Our first run was a rude awakening, we were all out of shape. Its amazing how many muscles you don’t use unless you are carving up the slopes.

My first wipe out was a bit catastrophic. I was cut off (a normal occurrence on the slopes) and tried to veer sharply off to the side to avoid a full on collision. The skier rolled on down the hill unscathed while I proceeded to tumble head over heels into a pile thirty feet down the hill. I used my face as a brake with a repeated apply-pressure-and-release system until my head felt like a boxer had been using it as a practice bag. I think I chipped a tooth, but it was hard to really localize the pain.

Our second run was fantastic. I was back in the swing of things a bit more and I was really working on my technique when I realized we were on the Olympic run. The moguls were soft and covered in brand new snow. Having rarely skied in fresh powder it was a bit unnerving until I adjusted my ice-carving technique to suit the several feet of fresh powder.

We skied the entire day, from the lifts first run to its last, and braked only for a quick bowel of chili mid day. And now I’m off to ice my knees and calves and relax for day two at Whistler.