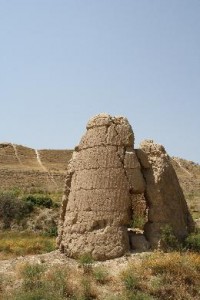 Yesterday we got in the 4×4 and took an off road expeditionary tour of Nissa,which was once a Parthian capital in the 3rd century BC. At one point over forty towers surrounded the small adobe fortress on the hilltop, but today there is little remaining of the once bustling capital. Atop a sloping, man-made hill rests one remaining tower which we discovered is used by several variety of bee as a giant nesting ground. A desert hedgehog had apparently gotten too close to the tower, for it lay crinkled in a ball at the base of one giant nest.

Inside the fortress itself, which is little more than a hill where the top is shaped like a bowel with a large depression on top where former royalty once roamed. Today the interior is filled with a strange crawling plant that albino lizards seem to enjoy. The locals who occupy the region directly to the north of old Nissa have erected a small adobe structure in the center where a guard lives to ensure everyone has paid the hefty 16M entry fee. We did not pay this fee because the guards at the gateway tried to extort more money out of us, so we took the off-road approach and hiked into the fortress on foot. Not an easy task in 105 degree weather in a desert without shade.

Along the western wall of the fortress was an irrigation canal where dozens of boys were swimming and washing their hair. Down the road several other children sat at small booth selling soap or sponges. There are no child labor laws here.

Nissa itself is an amazing story, set up by the Parthians, captured by local dynasties and finally razed in the 13th century by the Mongols. It was one of the more heroic last stands in Central Asia, and the more skilled and equipped Mongols took 15 days to captured the walled city, destroying everything within. Once the Mongols left, however, the site was used as a Zoroastrian temple grounds before being abandoned as the land around the fortress became arid and bleak.

One thought on “Sojourn to Nissa”