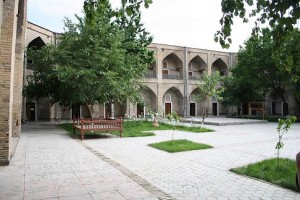 We were fortunate enough to spend seven full days in Tashkent, the capital of Uzbekistan, staying at the Grand Orzu hotel near the center of activity. Within walking distance to the train station as well as the metro, we were in the prime location to experience the city. While we saw and experienced many things in and around Tashkent, here are the highlights:

The regional museum. Shaped like a giant crown, this museum located on the fringes of Amir Timur park is well worth a visit. After buying your ticket (3,000 CYM) head up the stairs into the main room for a fantastic view of a three story mural, a tiled ceiling and giant chandelier and a Koran from 7th (Islamic) century. From here you can climb two more floors of relics from around the country, maps, pictures, gifts from foreign dignitaries and models of all of Uzbekistan’s major buildings. After the museum, check out the giant statue of Amir Timur on horseback. Some time ago someone stole his horses’ family jewels, check this out.

Seattle Peace Park. Here you can go to the tiny zoo (rabbits, turtles and a misplaced ostrich) or ride bumper cars, shoot counter-strike guns full of tennis balls or ride a row boat. Don’t skip it because it sounds cheesy, that’s all the more reason to go!

Broadway. This used to be a lively and active street until the president visited and disliked what he saw. Now it is calmer, but in the afternoon heat stroll down to see the artists put their finest canvas on display. 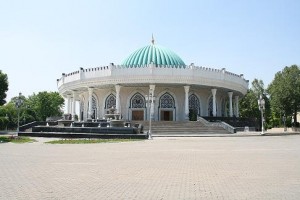 Old Town. We walked around the bazaar and then back behind the main selling area before coming to a building resembling a small leaning tower of Pisa. Behind the bazaar we met two boys throwing bits of carcass into the back of a van.

Nipon park. This Japanese park near the Inter Continental hotel looked amazing, but it was closed when we showed up so we simply played with some nearby mallards before jumping the subway. Looks like a classy place, but its 4,000 CYM to get in.

Metro. The Tashkent metro is well known because each station is different and it was original designed as a series of conveniently placed bomb shelters. While the place is swarming with guards and we hear photography is forbidden, it was still fun to ride around (we used it to tour the city on two separate occasions) and easy to use.