At the end of a tree-lined street, we stopped at an old clay fortress. We discovered that it was over 1300 years old. Middle Eastern / Central Asia in design, the fortress stood watch over a beautiful green valley. It was easy to envision the structure being the only building in the area protecting the furthest boundaries of various dynasties or empires. After getting some pictures on the fort, I turned to look at the Pamirs. It was almost crazy to imagine that just over that range was Afghanistan. The valley below the fortress was full of small huts and streams going through the lumps of green sod. We ventured out into the valley and found that all of the streams were fed by bubbling springs all over the valley. A quaint wooden bridges arched over several sections of the stream so herders could cross their fields. We then collected some food and water and headed back for Kashgar.

After several hours on the road again, seeing the same scenery – which was equally beautiful in reverse – our driver suddenly jerked the wheel off the road. We started a bumpy ride toward a massive mountain range across a small desert. Initially, I thought we were just going off-road a little ways to get a picture. After about 15 -20 minutes though, it was pretty clear that we were going all the way to the mountains. Somewhat of an unscheduled stop, the driver turned around smiling and said, “We are going to that peak right there. You can see some ice.” At least that is what I got in Chinese. The road got even worse and we started jumping rocks and small boulders with the jeep. And by “road” I mean middle of nowhere randomly driving across a desert.

After an hour or so, we started inching our way up and down hills and valleys to find a safe pass to the mountain range. 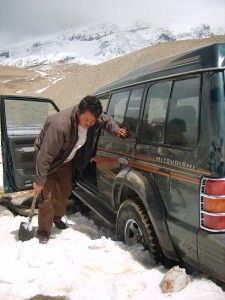 Our Driver Digging us Out

Suddenly, the driver dropped the jeep into a rocky Spring melt river bank. The jeep immediately became stuck in the snow. Everyone exited the vehicle, and started to help the driver dig it out. I was wondering, “Are we going to spend the night up here because, even if we do get it out of the snow, how do we get out of the river bank?” However, to my amazement we got back in the jeep and continued across the boulders and rocks. The driver was insistent that he drive us to where we needed to be. We requested that he stop so we can hike up the rest of the way. With a sigh of disgust, he stopped in the bank and we hiked for about 1 ½ hours to the edge of a glacier.

The landscape was beautiful. A beautiful white glacier was dipping into a valley between the mountains. We climbed around the glacier and took pictures for a while. Looking around in the other directions was equally amazing. Looking at the towering peaks above us, the clouds swirl by so quickly. However, maybe I was just dizzy as we were now well over 4800 meters or about 3 miles above sea level. As I turned West, there were dust devils whirling in the desert and a snow storm approaching through the middle. We quickly made our decent and headed back to the jeep. It took us about 30 minutes to build up a rock ladder for the jeep to get out of the melt bank. I am glad we did not blow a tire or hook the frame on a rock. It would have been a very cold way to end it all, but at least the scenery was nice. We eventually made it through a small sand storm and were back on the road to Kashgar.

We have a video but it will not upload, we will do our best to add it soon.

If you are interested in doing a trip like this from Kashgar, it will talk about 1 full day from Kashgar to Lake Karakul, and then another day to Tashkurgan, the glacier, and back to Kashgar around 9 or 10 at night. Don’t forget to bring your passport as there was at least one document check before we got to Lake Karakul. There were several Chinese police stations policing this “Autonomous” Tajik Region of Xinjiang, China, so there may be more checks in the future. 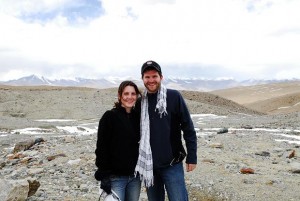 Lauren and Mike off the Karakorum Highway