The Adventurists are launching a new concept for a rally, this one is so daring, so amazing, so fantastic that once Lauren saw it she hasn’t been able to talk about anything else. She is literally rally racing in her sleep. So, what’s the big idea? Rather than tell you, look at the image below and let your sleepless, dream-filled nights begin! 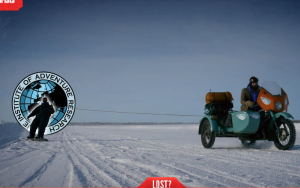 This, our dear lovers of adventure and friends, is a sidecar motorcycle in Siberia pulling a guy on a snowboard. They haven’t launched this rally yet, in fact these lucky folks in the picture are probably the first to do a rally of this sort, though they did it solo in an attempt to ascertain if it would be crazy and wild enough for an Adventurists Rally.

If you recall, in 2010 we did the now famous Mongol Rally from London to UlaanBataar, Mongolia. It was awesome, and it was organized by The Adventurists. Sure there were hiccups (why were we waiting at the border for three days, two nights without the paperwork the organizers were meant to have supplied?) but that will happen in any trip and especially one of this magnitude with over 500 people participating. I know it’s only been roughly one year and about a week and four days since we launched on the Mongol Rally, but already I can feel the shiver of excitement about the next one. Mike isn’t as energetic about the thought of driving around The Road Of Bones in the snow, pulling me on skis, but I can assure you the smile would be frozen to my face, even if I skied right off a cliff.

At the moment there are no more details on the Siberian Rally. Rest assured, I’ll be delivering details as I hear them. Since I’m currently in Beijing, it’s nothing but a short overnight train up to the frozen tundra to launch this awesome adventure, and I want to be there when it kicks off!  For other volunteer options, Original Volunteers provides the opportunity for anyone to volunteer abroad in over 18 countries around the world.