In my youth we would visit zoos all over the world. I’ve seen some of the most amazing zoos humanity has to offer, at the top of the list comes the Paris zoo and the Minnesota zoo, both of which offer a charming and humane environment for the animals while offering prime viewing and educational material for visitors. My visit to the Ashgabat zoo was startling, to say the least, and was accompanied by such a pungent blend of foul aromas that the interior of my nose began to twitch in protest. 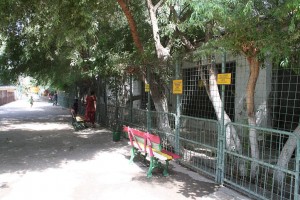 The Ashgabat zoo, in Turkmenistan cost 1M, which is about 30 cents, to enter. After walking through the cobweb covered entryway we first encountered a fence with various hand-painted wooden signs showing which animals were available at the zoo. We noticed that the signs were removable, in the likely occurrence that one should die. Vulture were the first exhibit. Behind a low fence with a metal tin roof (in 100 degree heat) a giant vulture sat on a rock ripping apart raw, dirt-covered flesh. We heard a chopping noise and looked behind the shed, a man had some sort of animal on a wooden block and was using an ax to dismember the creature for food. The vulture seemed happy about the noise while it made the hair on my neck stick straight up. Hand-painted signs showed a finger and the words “Ouch!” next to the cage. There was no lighting, and each cage seemed like a death-row cell dimly lit and containing a vile creature of children’s nightmares. 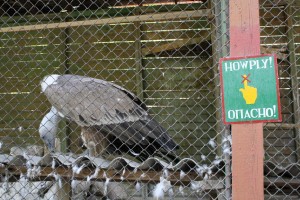 The second exhibit was a swampy cage where someone had patched holes in the wire with planks of rotten wood and a street sign. Inside the murky darkness we saw what appeared to be a ROUS, a rodent of unusual size. I have no idea what this mystery creature was, it looked like a rat but was the size of a cockerspaniel. One was white, with red eyes while its counterpart was black with black eyes. It had a long rat’s tail and webbed feet, and it also was ripping apart flesh with its two buck teeth under an “ouch!” sign.

The third exhibit explained one of the many foul smells, a duck pond under a low fenced roof that had not ever been cleaned. Ducks mated at random and chicks and elderly ducks lounged together in their own feces, apparently uncontrolled. The ducks far outnumbered the space available to them, and some were sitting atop others, which might have been dead.

The aquarium behind the duck pond proved the source of another of the unidentifiable aromas. The pool was open-air and contained a large and rather impressive collection of algae. Dead goldfish spotted the top of the pond while frogs and tadpoles swam around happily in their lurid haven.

Behind these wonderful exhibits was the bear, wolf and lion exhibit. Each had its own hand-made cage with sufficient room to curl into a fetus and cry. We watched for a few moments as the wolf attempted to run in place before falling over the sink used as a watering troth. The lion didn’t budge, and the bear sat picking at the goo running out of its eyes. Tears? 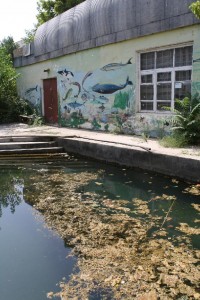 There was a rather odd array of happy looking porcupines. At least a dozen of them in various cages lounged in abandoned tractor tires lapping at still water and chewing on wilted carrots. They looked up at us as we walked by as if to say, “hey! Its better than being in the desert.”

There was a large collection of farm animals, especially camels and lamas, which seemed relatively content to be fed once a day and otherwise left alone. The locals in the zoo gave the lamas a wide birth for fear of spit, and did not allow their children to pet the camels, which looked past their prime and overly tattooed, a sign that these were once work camels who had exhausted their usefulness.

A bird park was the final crescendo, with turkeys, pigeons and chickens of various breed lounging around their piles of feces and still water with one eye on the man chopping meat for the vultures and the other eye on the children who tapped gently against the cage.

Despite the abysmal conditions at the zoo, I was impressed to see mothers explaining to their children what they were seeing, and those strolling around the park looked happy as they eagerly pointed at the dilapidated foxes or clapped their hands in glee at a spitting lama. It was no Paris zoo, but it will be at the top of my list of strange experiences in Central Asia.