The Beatles are Huge in Kazakhstan 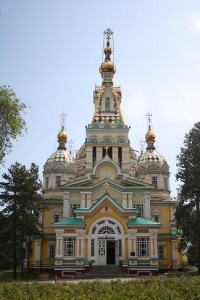 We arrived in Almaty, the former capital of Kazakhstan, at 6:00am after 36 hours on the train. We immediately realized how screwed we were when we tried to buy train tickets to Tashkent for the next day using charades, smiles and Pictionary-like drawings. We both studied Russian for the month before we left, and discovered that knowing how to ask someone’s name and where they are from is useless and unpractical, albeit friendly. Finally, I figured out that there was a train, from another nearby station, leaving at 5:12am the next day. I promptly bought two tickets for 12,000Tenge after speedily changing my RMB into Tenge at a nearby counter using a similar method of charades and Pictionary.
From the train station, we hopped in the back of someone’s car for 400T to So Young’s Youth Hostel. It was hardly 8:30am, but So Young was awake and set about making a nice breakfast of fresh peppers, bread, popcorn and tea. A New Zealander woke up and joined us, and a bit later a boy from Holland joined in. We discussed everyone’s travel plans and how So Young, a S. Korean native, had ended up in Almaty (logistics expert for rail transport).
While we have many legitimate gripes with The Lonely Planet guidebooks, the section on Almaty was decent and set up an 8k ‘walking tour’ through the key spots in the city. We decided to add ‘buy Russian phrase book’ to our to-do list for the day. We walked all around the city in honest awe of the cleanliness, greenery, modernity and friendliness of the city and debated settling here for 6 months or so to learn Russian in a comfortable and interesting metropolis. This is still a possibility, although we would also like to see what Uzbekistan has to offer.
We had a fine 6USD lunch at a bier garten and then walked to the city bazaar and mosque, as well as an old cathedral in the middle of Pavlov park. We walked to the cable car, but decided not to take it to the top because of impending rain clouds. An hour later it poured so ferociously that the streets soon filled with water. We ducked, quickly, into the town’s biggest expat bar in an attempt to meet a few locals to hear what they think of living in the city- but the bar was deserted. Dashing through the rain, we reached So Young’s and settled in for some quality time with the other travelers and So Young, and a nice evening prepping for our border crossing tomorrow and uploading pictures.
More from Uzbekistan soon to follow.

2 thoughts on “The Beatles are Huge in Kazakhstan”