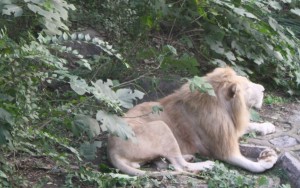 Since it was my birthday week we got to do a lot of really fun stuff. After all, you only turn 27 once! Mike decided to take me to the Beijing zoo to celebrate. With the new apartment I was hoping to get a cat but one of the room mates is allergic, so a trip to the zoo to see the giant cats there was a consolation.

In 2006 our visit to the zoo ultimately resulted in one of our friends yelling at a local child for tossing his empty coke bottle into the lion cage and yelling at the other animals. We were shocked at how people treated the caged animals, yelling, throwing things, banging on the glass and generally just being annoying and rude to the animals and other human visitors to the zoo. Now, 2010, things were a bit different. You still had the occasional asshole, but those are everywhere I suppose. At Como Park Zoo in Minnesota I saw a fourteen year old boy throw a hot dog into the monkey cage. So it goes.

A few memorable events happened while we were at the zoo. First, the boy throwing his coke bottle into the lion cage (lion helpfully pictured here). The lion jumped up and began to limp around the periphery of the cage. His front, right paw is seriously injured, you can see him holding it awkwardly in the picture. We watched for a while, but it looked like a recent injury. Hopefully they have resolved it by now! 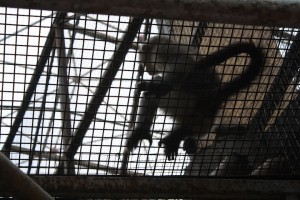 The second event was when we were attacked by the Golden Monkey. The cage, to preface, is shaped like a giant metal mushroom. You can walk under the mushroom close to the ‘stem’ and look up and see the Golden Monkey flying around in his cage from branch to branch. I was looking up at three monkeys clinging to the sides of the mushroom cage when suddenly the male monkey became aware of our presence and jumped from where he was perched, falling around 12 -14 feet until he landed directly above our heads on the cage roof. He snarled and scared the hell out both of us! He rattled the cage and showed his teeth and even pounded on the grating. He was really angry! We backed up (honestly, we practically fell over backwards he terrified us so much) and a moment later the monkey was back on the wall, acting like nothing happened. Naturally, we moved back under the overhang area and watched. A minute later he noticed us standing there and free-fell from even higher, landing right above our heads and rattling the cage and making off monkey yelling noises. It was like Planet of the Apes! 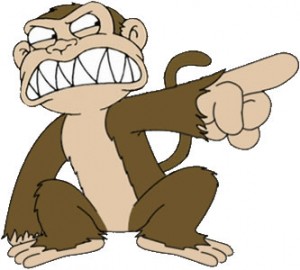 Mike pretended to get mad at the monkey, yelling at it “Don’t you scare my girlfriend on her birthday, evil monkey!” it only takes about five seconds for a million Chinese people to gather whenever a commotion is detected. Mike’s fake taunting of the evil money quickly drew a crowd…. a very large crowd. The evil monkey climbed back up in the cage and ignored everyone, making Mike look like an evil spectator and the monkey like the innocent victim. This was one evil monkey we were dealing with, here. We shuffled away eventually, when it became obvious the monkey had one that round. Don’t worry, we’ll go back to the zoo again soon and see who wins round two!

After the zoo we went over to a friend’s apartment for taco night. They were friendly enough to invite us over and one of the room mates at our friend’s place even produced an extremely large birthday cake! They hit the lights and came out singing Happy Birthday. We played cards and chatted about old times, these friends having lived in beijing since 2006. All in all, and despite Evil Monkey, it was a great birthday!