On the last day of our four day trip to HuangShan we were exhausted! We climbed down the entire mountain in one fell swoop, the details of this trek are etched into the backs of my eyes. Having finally made it to the bottom and had a nice night’s rest in a real bed, we woke up refreshed in the morning and had a nice buffet breakfast at the Best Western where we had happened to find lodging. 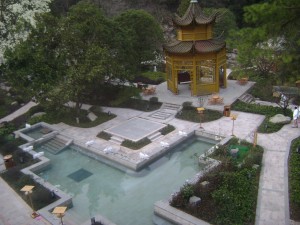 Labeled a 5 star hotel, the Best Western at the base of HuangShan could have been a tent with a mattress and I would have called it five star worthy, but this place deserved the stars even for the non travel weary. With rolling gardens sprawled across the estate and a wayward rock bridge crossing the valley before out hotel window, we were delighted.

After checking out of the hotel we wandered to the nearby spa (affiliated with the hotel for branding) and signed right up for the all inclusive hot spring afternoon for 169RMB. We put on our suits, downed some red tea and emerged in an Eden-like paradise! We were led to a large natural hot spring where staff waited on our beck and call while we lounged in the natural water and let the jets relax our aching muscles.

After a nice soak in the natural water we were led to a smaller pool full of liquor. The water smelled of booze, but the staff informed us that it was good for healing blemishes and making clear skin.

From here we were led to a pool of 40 degree water with coffee grounds in it. Literally a giant coffee cup roasting humans along with beans. We dunked in momentarily, having heard it was good for hair shine.

After the coffee we submerged ourselves more calmly in a slightly cooler pool of milk water. This was said to whiten and soften the skin. Set under a cherry blossom tree, we found ourselves in the shade and isolated, it was calming and beautiful, and we were the only people in the whole spa aside from staff.

From the milk we were dunked in red wine heated to 32 degrees. This was a pleasant spot as well, where we could hear water trickling and smell the grapes in the water.

There were several natural pools of various temperatures that did not contain anything other than water, though one contained salt. After several of these we were led to a very shallow pool where we had to sign a waiver.

Stepping into the pool I shrieked as loudly as I’m able (quite ear-splitting, actually) and nearly walked on water until I was standing on level ground. The staff roared in laughter and we read the sign next to the pool. The shallow water contained hundreds of tiny fish who were to eat dead skin off your feet and legs. I watched while Mike submerged his legs and continued to watch as they vanished around a pool of tiny green and blue fish. I returned to a natural pool and read a book for a while as Mike submerged his entire body into the fish tank. Mini Parana are not my idea of spa treatment, but it was interesting to watch!

Finally, after several hours at the spa we left, hired a random Huangshan native to drive us in his car to the train station, and spent a sleepless night on the overnight train back to Shanghai.