The Czech Out Party at Klenova Castle, Czech Republic 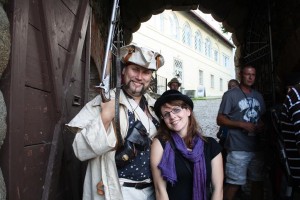 It was early evening when we finally pulled into Klenova Castle’s mighty camping area. It was not an easy sight to miss because the rolling green hills surrounding the castle were covered in rally cars with tents set up between them. Sprinkled throughout were ralliers dressed up to match the theme of the party—Jules Verne, the ultimate adventurer.

We parked our tiny red car near the Aussies, whom we’d met at Goodwood and the rally launch, and quickly set up camp. Before the tents were even up we had people tossing booze around and a great huff went up to find a bottle opener for the wine. We finished setting up camp and put on our costumes– which consisted of British boiler hats and scarves. We’re not that imaginative, it turns out. 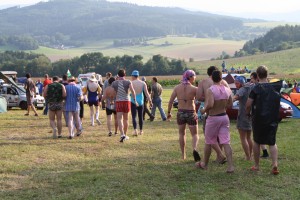 The gates opened at 7pm, so we headed up to the castle to see what treats beheld us there. Already a woman on stilts was amusing people with her hoola-hoop, and a giant was ushering people over for pictures. Another entertainer was a flame thrower and juggler, and they walked around the tents impressing people (amazingly, no tents caught fire!).

At the gates of the castle we were met with an even stranger sight, two men dressed as soldiers barred the gates. “No booze inside.” This suddenly explained the huge throng of people milling about with beers. We opened our wine and set up near a tree to finish our drinks and head inside. We were slightly above the entrance on a hill and from that vantage point could see everyone as they came up the hill. There were mostly men at the party (mostly men in the rally, also) and they came up the hill in drag. Almost every male in the area was in a bikini for some reason, although a few had more inspired costumes. I snapped pictures (no one here will ever be able to run for office, that’s for sure) and eventually a small group had converged with us to watch the party unfold. Two Canadians, an Aussie and a few Brits milled around with us, drinking merrily and talking about the upcoming adventure. Spirits were high and everyone was jovial, it was going to be a fun night. 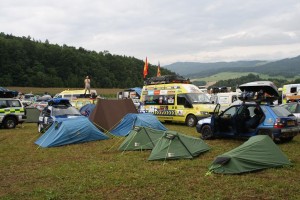 Eventually, we headed inside. A line  near the entrance indicated free food, so we jumped in. Free lamb, kielbasa, salad, bread and all manner of other delicacies awaited us. It was delicious and the most food we’d eaten since our friend in London took us out to a fancy Lebanese dinner. Free gin was provided, and we learned Brits have cucumber instead of lime in theirs Gin Tonics. Odd people, those Brits.

Music kicked in, and we found chambers of parties all around us. One den in the castle for hip hop, one for blues, one for rap, for dance music, etc. We watched the main stage for awhile– three women dressed as sailors singing Russian pop songs– and then chatted with people around us, including Mario and Luigi look-alikes and a group of people in Borat neon-green thongs. Don’t ask. I found the dance tent and set about showing those Brits how it was really done. Mike, who never dances, even joined the party as we did the robot as a group and then salsa dancing to Eminem rap. It was completely dark when we left the dance tent.

Back at the campground we found a nearly nude man laying in the field. He couldn’t see so we helped him to his tent. “do you know which one is your tent?” I asked. “it’s the green one” he said. I pointed at a few green tents with a flashlight and eventually he crawled in one. Satisfied, I headed to my tent only to see him come back out of the tent some ten minutes later saying “I don’t think that’s my tent!”

In the morning, I unzipped my tent to find a disaster area. People had bottles everywhere, trash was in piles, people had made camp fires near their cars, and some still smoldered. Whatever genius organized the rally had only two porta-potties for all of us (200+ people) so they were not usable, and the water tanks had long since emptied. The castle was closed. We packed up, cleaned up our area and hit the road with a few other teams heading to Prague. It had been an amazing party in the hills of Czech, and certainly renting out a castle gives you mad street cred.

One thought on “The Czech Out Party at Klenova Castle, Czech Republic”