The Final Day of the Cruise 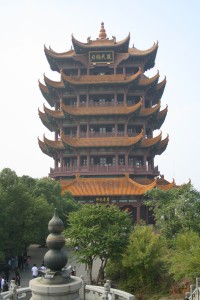 Again we were awoken at 5:00am as we passed through the final of three gorges. This last gorge was vastly different than the previous two, and we were happy that we had decided to go topside. The cliff sides were covered in lush greenery like a scene from Jurassic Park, and we took out our binoculars to watch for monkeys. After an hour the sun began to rise, and we joined the Swiss in the dining hall for boiled eggs and waterlogged rice. We continued our previous discussion of religion in Switzerland, noting that the Swiss pay taxes to the Church via the government. I pondered how un neutral this was, but decided not to point this out. We talked about neutrality for a long time, and though I had always admired the Swiss for being internally focused, I found neutrality to be a double edged sword. It protected the people, but it also meant they turned their backs on the world when it sometimes needed it. A truly confusion conundrum. After a leisurely meal the Swiss got off the boat to see a monument, we stayed on board and played cribbage overlooking the hillsides. The stop was the final day trip before the end of the cruise, but we had heard roomers that the stop was largely bullshit, another tourist trap selling plastic Olympic goods. The Swiss returned and sat with us in the windy sunshine and laughed at what a joke the last sight had been. It was a fake dragon boat race that lasted less than two minutes, but they had been forced to march at top speeds up a large hillside to see the race from afar. After a few warm beers and more discussion with the Swiss, we packed up our room and got off the boat. It had been an interesting four days, but I don’t think I would ever recommend the ‘cruise’ to anyone. At least not anyone I liked.

We boarded a bus for Yicheng, a nearby city where we would be able to buy train or bus tickets to Wuhan, and then back to Shanghai. We found Yicheng a beautifully modern and clean city that resembled, in many ways, the US mid-west. Our bus passed through a housing district of large brick mansions facing the river, and we watched, mouths agape, as the luxury passed behind us. Apparently black gold had made this village prosperous, that coupled with a constant stream of disembarking tourists had elevated the city. We rumbled towards the bus stop where we bid farewell to the Germans and the Swiss, and boarded another, more crowded bus that smelled of vomit and was full of flies. This bus would take us 5 hours to Wuhan.

Arriving in Wuhan near 21:00 we began walking aimlessly down a large street near where our bus had abandoned us. Curiously, we spotted the German couple down the road and hurried to catch up with them. They had arrived an hour earlier and had checked into a hostel down the street. We followed them to the hostel, checked in and then set about devouring a round of beers with the Germans. We took a cab to look for western food, but ended up in a Chinese buffet hall when we realized it was too late for most restaurants to be open. Returning to the hostel after a tasty meal- our first in five days- we slept soundly and awoke refreshed at 10:00, the latest we had slept since leaving Shanghai.

After a nice breakfast at the hostel we went to the Yellow Crane Pagoda where, for 50Rmb one can stroll along the gardens and climb the pagoda where Li Bai had been humbled by former masters and an amazing view of the river. We spent the afternoon talking about American politics and slowly walking through the shade of the bamboo. Resting often, we felt close to the Chinese of old who had had a lifestyle of learning and growing. After the pagoda, which is a beautiful spot in Wuhan I’d highly recommend, we returned to the hostel to spend the afternoon resting in the sunshine. Mike found an abandoned guitar and he strummed songs and sang all afternoon in a cove in the hostel. I read Empire of the Sun, a gift from a Shanghai friend I had recently received for my birthday, and we whiled away the hours sipping beers and relaxing. We ate a nice hostel meal that was the largest array of foods we had seen in ages, and dined until our bellies hurt. At 17:00 the Germans appeared and we decided to share a cab to the train station. Once we arrived the Germans bought another round of beers and we chugged them on the platform and shook hands and exchanged phone numbers and emails. Traveling in china always produced friends of necessity, but this trip had been very good to us, and we adored the Swiss and German couples we had met on the trip. We boarded the night train to Hangzhou, and were amazed at the modernity we were faced with. This was the cleanest and nicest train we had ever been on, and we stayed up playing cards and drinking cheap beer until the lights were turned off and we crawled up into our top bunks and slept.