The Mount Washington Hotel and Resort 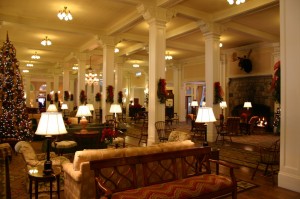 Also known as the Bretton Woods Resort, the Mount Washington Hotel is the one of the last remaining “Grand Hotels” of New Hampshire’s White Mountains.  Since it was built by Joseph Stickney in 1902, for a mere 1.7 million dollars, it has been host to a variety of historical events, politicians, and celebrities.  The Kennedy’s were known to vacation at the hotel during ski season in the White Mountains.  The hotel was a moderate success until Income Taxes, Prohibition, and the Great Depression reduced guests to minimal numbers.  The hotel closed in 1942 during World War II, was purchased by a Boston syndicate in 1944 for only $450,000 – a fraction of what it was built for decades earlier. 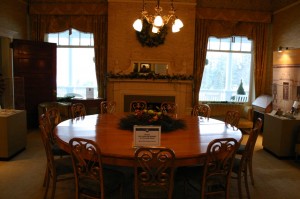 Shortly after the purchase, the Bretton Woods Monetary Conference convened while the Allies pushed their invasion through France.  750 delegates from 44  Allied nations met to discuss the commercial and industrial economic recovery of the world following the war.  The Bretton Woods Conference established the International Monetary Fund (IMF), The International Bank for Reconstruction and Development (IBRD) – which became part of the World Bank.

The IMF, still today, oversees the global financial system on a macroeconomic scale of countries who affect the exchange rates and balance of payments.  Initially created the stabilize the world economy following the war, the International Monetary Fund now lends money to developing a struggling nations through a system of annual donations from member nations.

The IBRD was originally created to fund reconstruction in countries devastated by World War II.  Now, the IBRD is one of the five facets of the World Bank and currently finances poor and impoverished nations by acts of lending.  I was amazed to discover that such modern day controversial and monumental conferences that affected the world, were brought about in the small rooms of the Mount Washington Resort – nestled away in the White Mountains of New Hampshire.  The resort was giving a grant of $300,000 for hosting the conference and $18 per room from each of the delegates for the three week conference.

Walking over the creaky wooden floors and through the drafty hallways of this grand old hotel, I couldn’t help but hear in my head, “All work and no play makes Jack a dull boy,” and “Here’s Johnny!”  Or even worse, I thought I would see those two twin girls in blue dresses at the end of this hallway in the picture to the left.  Down the corridor in that picture, to the left, there was also a bar which was coincidentally empty except for one well dressed man cleaning a glass behind the counter.   That was it, I was convinced that this was the hotel from the movie.  However, The Shining was filmed in a similar aged hotel in the mountain of Colorado.  Just as in the Shining, Mount Washington used to close down in the winter as the roads were too snow covered to reach the mountain resort.

In 2008 the TV Show Ghost Hunters featured the Mount Washington Resort attempting to find ghosts of the past in the 100 plus year old hotel.

Regardless, visiting the Mount Washington Resort was a great historical experience and although we didn’t stay, maybe next time.

One thought on “The Mount Washington Hotel and Resort”