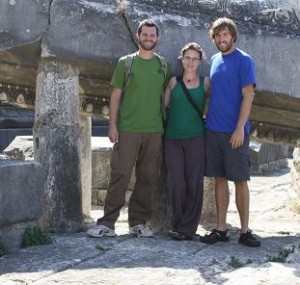 Priene, Miletus and Didyma are three rather impressive ruins along the Aegean Coast that are smaller than Ephesus, but were important pilgrimage or economic sites in their day. We decided to rent a car from Selcuk and drive to all three of the ancient cities for a tour of the ancient world. Since neither Mike or I had driven in quite some time (and the rental car was a manual) Matt took the helm and Mike acted as navigator as I schemed on how best to see all the sites in one day.

Our first stop was Didyma, which was an hour and a half drive from Selcuk, counting the ridiculous detour through Soke (the town we were stuck in on our night-bus nightmare earlier that week). Didyma is the site of the Ancient Temple of Apollo, which missed out on being one of the seven wonders of the ancient world to the Temple of Artemis by a mere seven columns. We found this site much more impressive than the other because of what remains intact.

Our second stop was Militus, which was an ancient ruin of a theatre. It was a full three stories with a later era citadel atop the theatre. Caves wove in and out of the stadium carrying people to various levels. Like modern arenas, they had letters and numbers carved into the seats for their tickets. The ruin was impressive enough, but behind it was a hammam built by Marcus Aurillius’ wife, which was largely intact and impeccably built. 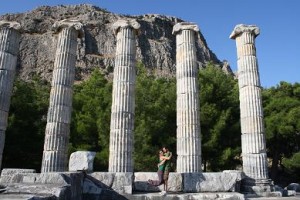 Our third stop was Priene, a hill-top city visited by Alexander the Great. The large Temple to Athena on the top was still standing in places, and the view of the valley (which used to be under water) was astonishing. We jumped from rock to pillar and played in the ancient arena before descending and driving to our camping spot for the night in a town near Selcuk, where we planned on returning the car by 10:00am the following morning. We had pizza and walked along the coast chatting about the ruins we had seen, and how amazingly lucky we were to have seen them. In twenty more years all of these sites might be under glass, or roped off with chains. This was easily one of the best days of the trip, and we were in high spirits as we played cribbage in the tent that evening . We all fell asleep wondering what Ephesus would possibly be like, since we would be seeing it in the morning.

3 thoughts on “The Three Ancient Cities”