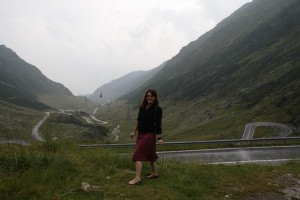 If you haven’t seen the British TV show “Top Gear” then you probably aren’t alone. I haven’t seen it either. But, apparently everyone on the rally is in love with the show, which features a few men who take on auto-related challenges around the globe in seemingly anything with an engine and a few wheels.

All the Brits were raving about a special road featured in Top Gear and was made famous from car commercials and other car-related things. This road was called The Transfagaran Pass, so we stuck the nose of our car in that direction. It was not far from the camp ground but we still managed to get lost, a daily occurrence for our tiny convoy. Eventually we found the right road and discovered it was a winding narrow road up the side of a mountain. 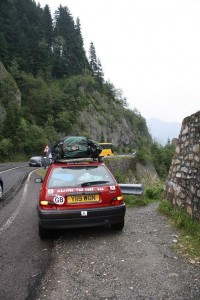 Motorcycles were buzzing past us and faster cars passed us as if we were not on an incline at all. We stayed in first gear the whole time. Finally, we reached the part of the road that made it famous, a hillside with switchbacks going all the way to the summit, where a small lake awaits. We gunned it at an insane 20 mph, finally reaching the top without having anyone puke in the car. The view was breathtaking, and well worth the drive. We drove on through a tunnel, where our convoy began honking at one another, and all the locals joined in filling the tunnel with honking and cheering.

It began to rain, and since our tires are as smooth as a baby’s bottom we decided t head down rather than take the road the entire length towards Bucharest. Oly and Oli had to drop Rikki off at the airport, as he had to fly back to the UK for work. We said our goodbyes on top of the mountain and waved as they went back through the tunnel and we headed down the hill towards Bran.