There and Back Again, a Lauren’s Tale 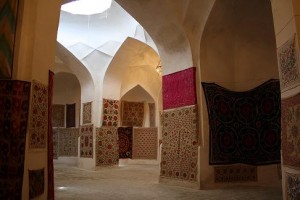 The route from Khiva to Bukhara, which we had done not a week earlier, was easier on the return as we knew quite well what to expect: cramped conditions, sweltering heat, screeching Islamic music, a driver screaming on his cell phone, and multiple security stops. We bargained for quite a while with various drivers until finally one agreed, the largest and most intimidating of the lot, to take us for $18 USD a piece. We had heard others bargain for $15 a person, but standing in the 90 degree heat with all of our bags on did not inspire me to drag out the process. We later found out that the average price is $20 a seat, so we had done well to get $18 for a 5 hour cab drive across the desert. 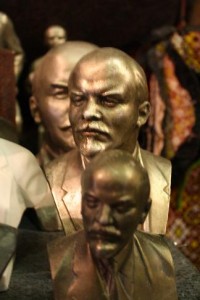 You may be curious as to why I’m quoting in US dollars. Believe it or not, Uzbekistan runs nearly entirely on US currency. Everything in Samarkand, Bukhara and Khiva is quoted in US prices and you negotiate in dollars, even if you end up paying in CYM (the Uzbek currency). We wrote before that there were two rates of exchange in Uzbekistan, the official rate (1,400 CYM to the dollar) and the black market rate (1,800 CYM to the USD). Everyone uses the black market rate when talking about USD. It is amazing to me that everyone in this country uses the dollar. It’s a testament to how stable they think the US is in comparison to the limited faith they have in their own economy. You’d think the government here would focus on stamping out the USD in the country, as it’s a bit embarrassing for them as well. However, at a restaurant owned by the president’s daughter, prices are in Euros, not CYM—not a very good sign.

This time we were ready for the ride to Bukhara from Khiva, and I had taken a Dramamine in preparation for the bouncing (the cars have no shocks) and jolting that would occur for the next 5 hours. What I wasn’t ready for was a neon-yellow bee to fly into the window, into my shirt and sting me in the ribs. This neon buzzing machine scared the hell out of me for its intimidating color and twitching buttocks. Luckily, I’m not allergic to bees, having been stung literally hundreds of times in my life—twice already on this trip. We arrived without other incident and met up, accidently, with the German-Russians (whom we had met on the fortress adventure in Khiva) at Lyabi-Hauz, where they told us that Olga was popped on by a bird as the car sped through the desert (which is considered good luck in Russia!) while the window was mostly rolled up.

3 thoughts on “There and Back Again, a Lauren’s Tale”