Olympos – Olympos is a relatively concealed and close-knit community of hostels and beach-style tree-house cabanas. Very few tourists visit the location, which is filled with backpackers, hippies and Europeans trying to get in touch with their inner child. The town is located 200m from the beach and surrounded on all sides by ancient ruins dating back to the Hellenistic period, and spruced up by the Greeks and Romans in later years. Ruins sit in the jungle along the coast waiting to be discovered, and the rocky beach offers cliff-jumping opportunities along with crystal blue swimming waters. 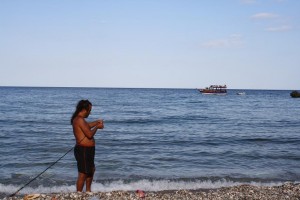 Fethiye – This small, Mediterranean coastal city is exactly what the doctor ordered for yachters and wealthier travelers. With a charming cove harbor where you can dock your boat directly in front of sea-side restaurants and cafes, what isn’t to like? A castle overlooks the entire scene from atop a hill, and ancient Greek and Roman crypts draw history buffs from around the globe, who can climb atop and even inside the crypts to wonder at ancient methods of entombing the dead. Old town is particularly nice, and offers exotic shopping, eating and drinking opportunities.

Ephesus – While classified more as the Aegean than the Mediterranean, Ephesus hits the top five list because of its amazing history and coastal location, and because early trade routes indicate that Ephesus was in touch with more to the east and west by sea than previously assumed. We enjoyed the ruins of Ephesus, and the nearby ancient cities and religious sites. It would be easy to spend weeks here.

Malaga – Located in southern Spain, Malaga is known for its wine, its castle and its impeccable sense of style. While expensive, this city makes the list because its wide, clean boulevards were filled with live entertainment and bohemian human art. The castle, while groomed and recently rebuilt, still offers great views of the Mediterranean, the harbor and the city itself, making it a fine place to spend a few days if you can afford the luxury digs.

Tunis – The capital of Tunisia sits directly in the Gulf of Tunis, which protects the city from wind and water without hampering the amazing Mediterranean views. The water is warm and teeming with fish, which gives the residents of Tunis opportunity to board themselves in tiny boats and run pattered grids across the harbor at all hours of day. Tunis is close to Carthage, or Roman legend, and offers shopping, spices and a real Middle Eastern atmosphere of entrepreneurship.