Top Sites of Baku and Azerbaijan

Azerbaijan, being currently in the middle of an oil boom, is as expensive as Europe. We were confined to Baku because we only had a few days on our transit visa. We talked with other travelers about the best sights and heard about the James Bond Oil Fields, which were featured in the opening scenes of The World is Not Enough. We set off on a bus for 20cents to the city’s largest mosque, which was destroyed (not surprisingly) by the Russians and rebuilt recently atop the hill overlooking the oil fields. Several dozen nodding donkeys pumped oil out of the ground in the field along the Caspian while dozens others were nestled in people’s backyards or along the side of the road. The entire area was alive with up and down movements everywhere you looked. The site, however, sounds cooler than it actually is because you are not permitted to go anywhere near any of them, and can only look down on the chaos from atop a rather tall hill. We spent most of our time watching the dock workers at the Caspian Shipping Company as they loaded a research vassal and an oil rig builder. 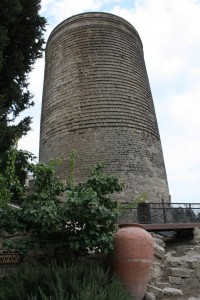 The Maiden Tower in Baku

We heard about the mud volcanoes outside of Baku several hours, but everyone said they were lame and to skip it because the cab drivers who wait at the bus stop to pick up tourists will take you out to the mud volcanoes and then charge an arm and a leg to get you back to the bus. Meanwhile, the volcanoes themselves are apparently very small and unimpressive. Having seen the boiling mud craters in Darvaza in Turkmenistan, we were fine to skip it.

The Maiden’s Tower in Old Town was amazing. The architecture and construction of the tower was unlike any other for its time, and historians still argue about the purpose of the odd structure. It is called the maiden’s tower not for any damsel in distress saga, but because the tower is impenetrable, with 5m thick walls. From the top there is a great view of the Caspian, but an even better view of Baku.

Old Town is well worth some time getting lost. We spent hours walking around the back alleys, admiring the stacks of moldy bread and playing with the endless supply of feral cats. The nearby fountain park area displays old European architecture that is steadily being rebuilt and recovered in sandstone facades of the new style. The entire area was under construction when we were there, with sandstone flying everywhere as experts carved new bricks.
The Boulevard along the Caspian is a beautiful, several kilometer long parkway that is soon to be the gem of the city. This was also under construction while we were there, but this did not prevent us from enjoying the views, or the shade of the trees in the hot summer sun. 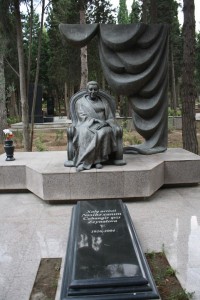 By far the two most interesting things we saw in Baku were the Monument to the Martyrs and the Cemetery. The first was a large park with a headstone for each person slaughtered by the Armenians in the massacre of 1992. There was a monument to those who fell to the Russians in 1990 and even a small monument marking the graves of the British who died in Baku trying to keep the Turkish from invading during World War I. The cemetery contains the resting place of the president, as well as celebrities, scientists and other important people from Azerbaijan’s history. You can take a little tram ride up the side of the hill to reach these two spots for 20cents, and it’s well worth the trip.