Travel by Train, Shanghai to Chongqing

Mountains rose up from the land like rude interferences to local farming as hills were chipped away into terraces in a massive attempt to convert the fertile soils of the hillsides into useful space. We gazed out the windows of the slow train, watching the landscape change from the water-logged and soggy Shanghai flatness to the mountains of South-Western China. The train ambled slowly and comfortably along under 50mph, a speedy pace for the relaxed passengers on board. 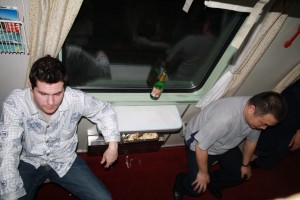 Mike resting on the train

We watched small, gray and brown towns of under 20 houses pass by surrounded by fields of growing food and flooded rice fields. Suddenly, bright yellow and blue buildings with steeples on each rooftop rose out of the shrubbery to confuse us. The lavish colorful villages were mini Disney lands for the peasants on board used to stucco and mud buildings. We saw no people in these Disney-like towns, and no farmland surrounded the towered buildings. I wondered how they paid for their odd architecture, and where all the residents were, and how they had come to chose small church-like structures for their homes. Without a source for answers, we shrugged and resumed watching. The landscape quickly returned to the traditional gray and brown houses and fields, leaving us wondering if it had been an aberration.

Before leaving Shanghai, Mike and I both bought matching ridiculous pajamas. In the city, many people wander around at all times of day in full pajamas, we thought we would join this culture of relaxation, and donned the PJs before stepping onto the train. On board we purchased pomegranate, oranges, pistachios, grapes and noodles and, of course, a few bottles of beer. We sat playing cribbage on a small wooden peg board as we watched the scenery swoosh past. By 20:00 I had won three games to Mike’s zero, so he left the table to chat with a young Chinese man also traveling towards Chongqing. They dined on rabbit leg together as they chatted about women, jobs and China while I read in my bunk. Our six bed cabin was shared with a silent young woman in neon pink who said not a word for 31 hours, and a family of four (a couple, their 8 year old son, and a very limber 90 year old woman who bounded around the cabin grinning with her few remaining teeth). The small family shared three beds, and they spent their time entertaining the spoiled young boy, who spent his time irritating every breathing soul on board with screams, jeers and cries for candy.Throughout the train car, other children ran around quaintly playing with small paper toys while adults chatted with each other and socialized. It was a moving sewing circle, playground and men’s smoking card house all in one.

In the evening the lights were turned over at ten and we all climbed into our bunks for the night. Below Mike’s bunk a man snored louder than a chainsaw, and I worried for his health with such a strange and noisy condition. If he was asleep, then no one else in the cabin was. I lay awake all night, relaxed but tired, and listened to the helicopter-like noises of the fat man below Mike’s bunk. In the morning, noise and motion resumed at 6am when the lights promptly snapped on. The smell of instant noodles filled the cabin, as did the sounds of slurping and spitting. After trying to sleep for several more hours, we finally gave up and snacked on nuts and berries as we played a few more hand of cards. I won all but one game, leaving Mike quite dejected. Having tried train food the previous day, we were determined not to ever order it again, and listened to our stomachs growl as we traveled.

It was national day, Oct 1st, 2008. In 1949 on the same day the communists had officially come to power and announced the People’s Republic of China under Mao Zedong. To commemorate this occasion, all of China is given a week holiday each year in early October. For one week, all of China’s railways and highways are crowded with loud travelers eager to reach their families. It is known as the worst time to travel in China; an equivalent to Thanksgiving in the USA. We went anyways, eager to be a part of the hustle and noise. On the train, a more relaxed form of travel, we were surprised at how smoothly everything fell into place. We napped, gamed, read and blinked back the sun as we watched the scenery change. In all, it was a pleasant trip to Chongqing, and we arrived 31 hours later, a little tired and smelling of noodles, but quite relaxed and eager to start our tour of the city.