Traveling by High-Speed Train in China: Beijing to Xian

The train from Beijing to Xi’an would be a long, overnight sleeper train. I had glorious images in my head of a large stateroom with bunks and a water closet. I skipped along with my large backpack barely weighing me down. The tickets were cheaper than we thought they would be—about twenty US dollars a piece. Mike did not tell me that they were cheaper because they were sold out of soft sleepers, and we could only find space in the hard sleeper, general population cars. We climbed aboard and stopped. Something dark flashed past our feet and into the next car. A dog? A rat, possibly? The smell of the nearby toilet stall was nearly unbearable, it burnt the interior of the nostrils so much that we were constantly inching our noses. The smell was almost a physical presence in the compartment. We moved down the narrow isle until we found our bunks. We were on the top bunk (three high) in a room with six bunks total. The room itself was the size of a Volkswagen beetle. We took off our shoes and scaled the interior of the train until we reached the top bunks. The space was so small that one could barely brace oneself on the elbows, let alone sit up. Below me was a man who must have been nearly ninety. He was hunched over, his shirt rolled up in the back and an equally ancient woman was pounding her fists against his spine. He coughed into a jar and sealed the lid. She cleaned his mouth off with a yellowed towel and resumed pounding on his back until he spit into the jar again. When they had exhausted this activity, they put the jar on the table between them and a terrified looking young Hong Kong man in the opposing bunk. 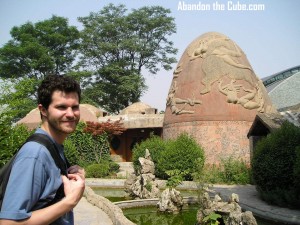 After a while I tuned out the coughing, spitting, and slurping noises and even managed to ignore the smell of urine and boiled eggs. I read a book, wrote in my journal, looked out the window and generally was as relaxed as I had remembered being in a really long time. I loved traveling by train! Every few hours a lady would come down the isle with a cart of instant noodles and milk cartoons and, to our surprise, warm Tsingtao beer. We pulled out our cards, opened a few beers, and set to playing each other in poker. We kept a tally, promising to pay out the winner at the end of the trip. By the time we got to Xi’an, a whole page of the notebook was marked in hash marks and stained with beer.

Xi’an is a beautiful city, and one that I will forever recommend. Parts of the original city wall still remain, and though we did not have time to scale the wall, it was a stately and majestic bit of ancient architecture that made one feel like they had stepped into a time warp. Xi’an is the capital of Shaanxi province, and a former capital to multiple Chinese dynasties. The city was famous for its powerful position throughout history, most notably revealed in the massive army of terracotta warriors which were created to carry the emperor Qin Shi Huang into the afterlife.
Despite all of the amazing historical sites in Xi’an, our first stop (at my incessant pleading) was to Banpo, Neolithic village! This little museum was built atop ancient ruins believed by some to be the first true village with remaining artifacts, some of which are said to date back further than 4500 BC. The reason I wanted so desperately to visit this site is somewhat embarrassing. I had played a computer game called Chinese Empire, wherein you had to build up your civilization from Banpo (the first village of huts) to Beijing (the mighty capital). It was my first computer game, and I loved building Banpo. I was not very good at the game, so spent a lot of time building and rebuilding the city, catching fish in the nearby creek and trading furs for wood. Banpo, the actual Neolithic site was not a disappointment– at all! I enjoyed every marvelous second of the tour through the ruins, starring in awe at pottery shards and looking at the evidence of an early matriarchy. Mike was nowhere as amused as I was, and was eager to get out of the village and see the warriors. Finally, after several photo ops with Neolithic fragments, we left for the main event—the 2000 year old Terracotta Warriors.

Beijing Train travel in China Xi'an
Previous PostTerracotta warriors in Xian: A Reassembled Army Next PostMaking the leap: How We Became Cube Abandoners