Since I was a little girl I always dreamed of going to Africa. When we arrived I could not stop repeating in my head, “I can’t believe I’m in Africa!” I was so excited I literally ran through customs and in my rush didn’t even get my passport stamped! No one seemed to care, a small band of three men in red suits played drums and had a hawk sitting on a stick which people were paying to hold or pet. Further down several men in traditional garb were offering camel rides while past that two men blowing into exotic animal skins were making strange and peaceful music. Another man and his companion ran around passing out flowers on the other side of customs while yet more stood around offering cab rides or taxi tours of the city.

We arrived in Tunisia at 7am and quickly walked into town. There was not a lot to see in Tunis itself, but Carthage and the Old Town were several kilometers outside Tunis and transportation costs were extremely outrageous. The taxi drivers by the border were a bit on the untrustworthy side, and they charged in Euro (with a small print 20 Euro per hour sign taped discreetly to the back window). We decided not to take a cab (and buses were not available) to any of the big tourist sites, and opted instead to just enjoy the capital for what it was. 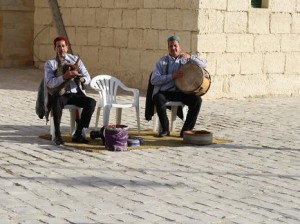 Tunis rests on the Mediterranean, not far from Italy and thus in a prime spot for warm, clean air. The weather was hot and dry by 9am as we strolled through the city’s colorful streets snapping pictures and waving at friendly locals. The number of cats in the city was beyond startling, and rivaled Bulgaria, which also had a preponderance of felines. We walked along the coast watching the early morning fishermen bring in their catch. Many were fishing with nets only, and their return for the morning looked meek. We passed several homes with BMWs parked in the front while along the shore we spotted several women brushing their teeth in the tide.
We walked deeper into town and, although I was feeling a bit ill with a mild case of the flu, decided to just park ourselves on a bench for a while and watch the street activity. A white paneled truck pulled up in front of our spot and began unloading. From our angle it was a ghastly and horrifying sight! The truck had roughly 12 dead cows hanging from hooks drilled into the ceiling, the floor was literally a pool of blood. There were more flies than I have seen in any one place in my life, and when the doors to the truck opened they flew out as if choreographed. The driver got out and grabbed a saw from under his seat, and when he pulled on a leg to begin sawing I felt my stomach do a few cartwheels. This could have been because of the flu, or because I was watching a leg be sawed in half. The passenger nudged a cow’s head (complete with fur, horns and eyeballs and all!) further into the pool of blood and helped the man hold the led as he sawed. While I was watching all this I didn’t notice that a small group of men unloading frozen French-fries out of another truck had stopped to laugh at my horrified expression. When I finally noticed them they were having a hilarious time laughing at me, which was all in good fun.

The smells in Tunis were enough to add to the flu symptoms and the cart wheeling from the massacre in the truck, so after not long at all I decided to call it a day and head back to the room. By 11am it was nearing 90 degrees, and although Mike was insisting it was hot out, I felt extremely cold, which was also a bad sign for my flu being on the rise instead of the fall. Nevertheless, we enjoyed a nice long walk back to the room while Mike hummed various oldies and I snapped pictures of the wonderful blue and white buildings dotting the coast.