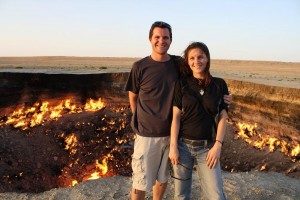 Dante readers beware, the “Gates of Hell” are very real. They are located in the middle of a vast, uninhabitable desert (not unlike the Biblical desert where Satan tempted Jesus) outside Darvaza, Turkmenistan

Locals say that someone was drilling for natural gas in the desert when the drill hit an air pocket and the friction of the metal piping exploding at massive speed out of a rock hole caused a spark to ignite the reserve of natural gas, setting it eternally alite.

Today the crater is 60 meters across and easily 50 meters deep at its furthest point. The flames burst out of the crater fueled by the natural gas, but to the casual eye it looks as if the rock and sand are simply emitting an enormous amount of heat and flame. At one point there was a thick cable circling the crater to keep curious travelers at a safe distance, but the heat of the eternal flame managed to snap the cable, melting sections of it into piles of ruble, while other sections have become fused into the landscape.

For roughly a kilometer in every direction the earth is grey and lifeless, inhabited only by beetles, spiders and perhaps a wandering lizard. A strange coral reef looking rock sticks up from the grey sand in stalactite-like formations. All attempts to identify the rock online proved futile, though I’m no geologist. The remnants of a now unidentifiable machine rest all around the perimeter, and as I circled the area I found lizards and other creatures warming themselves on the hot metallic surfaces of various engine parts presumably belonging to the unfortunate drilling device that started the whole saga. 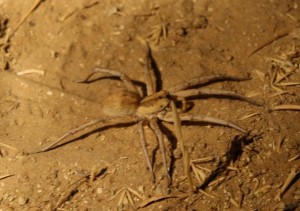 The wildlife around the dead ring of sand becomes more intense and is reminiscent of the creatures in Storm Troopers. Walking out to the crater at night with nothing but a flashlight and, naturally, a giant flaming crater to indicate the way, I managed to hit an angle with the flashlight just right so that in the distance I saw two tiny green gem-like lights glistening in the distance in the sand. I walked over to investigate and leaned in really close. The two gems turned out to be the curious blinking eyes of a spider the size of a golf ball, with his eight hairy legs extending out from there like so many reasons to run and hide. I slowly backed away and shined the light at the same angle across the landscape. All around me pairs of little green lights blinked like lightening bugs and panic rose in my whole body as my arms, thinking on their own, attempted to fly me out of there. I ended up with two flashlights, one scanning the distance for green gems to avoid, the other aimed at my toes so that if one came near my I could scream my farewells as my heart stopped. 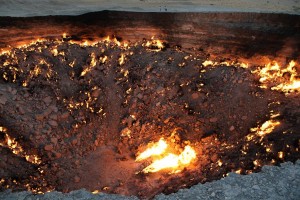 We decided to camp out at the crater, obviously this decision was made before I knew an army of giant spiders inhabited the warm sands around the crater. We set up our tent, started a fire of our own, and cooked a simple meal while drinking beer from the cooler. (We are Americans, after all, why not tail-gate the gates of hell?) In the distance, the crater raged seemingly out of control, the flames licking the sky as if to snap the stars right out and gobble them up. We danced around our own little fire to the tuns from the portable iPod, and listened to Mike play the guitar with the fire from the crater cracking the percussion in the distance.

. We boiled water in the morning for coffee and were on the road again by 9am. Twelve kilometers from the natural gas crater lies a crater of greater depth but lesser width that is filled with water. The water emits bubbles, indicating heat, but there is little information on the spring, or why the crater is so deep (at least 70 meters). All attempts to find a boiling miniature mud crater in the vicinity were in vain.

Despite the giant man-eating spiders (that get bigger each time I tell this story, naturally) and the bubbling water that could cook you alive, or the crater of fire that form the gates of hell, I still find Darvaza one of the nicest and most interesting natural wonder I’ve ever had the pleasure of enjoying.

For more information on Darvaza and Turkmenistan please see read about our Second Trip to the Gates of Hell and our Turkmenistan Destination Guide.

14 thoughts on “Visiting the Gates of Hell, Darvaza Turkmenistan”