Washingtonians Believe in the End of the World 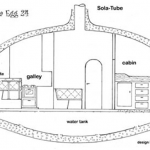 What better way to spend the Armageddon, then waiting it out safely underground? Apparently I’m not the first person to think of this. Washington State is renown for its end-of-worlders, and recently I met someone who worked in construction, building underground shelters for folks who live in constant fear. These shelters, or “UGs” as the builders call them, cost more than most people’s primary homes, and are built to withstand large eruptions or man-made blasts. They are usually constructed under a barn or other large object to conceal construction, and are stocked with yummy end-of-days foods like dehydrated eggs and grains in large 5 gallon tubs. The end of the world business is quite a lucrative one, apparently, as these specialty tubs of food and supplies have a huge profit margin. The Sea Egg (in the image to the left) is just such an underground shelter. It is essentially a bubble deep under ground, where earthquakes, eruptions or anything else cannot penetrate. The home can be built by two people with re-bar and concrete, and the plans can be bought online or else a professional team can add the greater comforts (and style) if you hire it done.

But underground homes are not the only alternative should Armageddon strike. Underwater homes are just one additional alternative. Ocean real-estate is cheap (aka-free) and the construction costs are not as steep as you might think. Already, chic underwater hotels are attracting attention internationally. you simply run your boat or swim out to a pipe in the water, climb down the pipe into your home. An additional model has people swimming or scuba diving down into a wet room and coming up inside your underwater home. This alternative is a ways off, and in the testing stages on most designs. For now, the do-it-yourself underground sea egg, or hiring a local UG construction company may be more practical and logical.