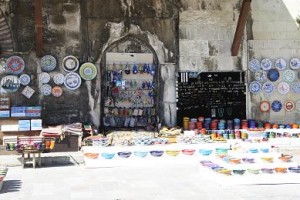 Having arrived in Istanbul at 11:00pm, we were a little out of luck for transportation. We waited for the Metro and then took the trolley and after a long walk ended up in old town, where we were covered in sweat from hauling our 50lb packs all over town. We checked into the Sultan Hostel and crashed in the 30 bed dorm, which was full of the sounds of people sleeping on the inside, and people partying and drinking on the outside.

In the morning, we all awoke at 5am and bolted out of bed to the loudest call to prayer. The Aya Sofyia and the Blue Mosque, as well as countless smaller mosques in the area, all sounded off at different times between 5 and 6:00am, ensuring no one could stay asleep. We got out of bed and tiredly ate breakfast and planned out our day. We walked around and looked at the mosques, although a bit grumpily considering the wake up they had given us. In the afternoon we toured the Spice Bazaar and the Grand Bazaar, both of which far exceed their reputations. They were full of people screaming, “welcome to Istanbul, where are you from, friend?!” and trying to sell us anything from carpets to T-shirts to bananas to live leeches that clean your dirty infidel blood.

We had kebabs for every meal in Istanbul, so we grabbed a few for lunch near the Bazaar and walked around the Hippodrome and the Cistern before exploring Old Town’s back alleys and quaint little village-like streets. The day flew by quickly, as did the following day while we did laundry in the hostel, wrote in our journals and lazed around on the roof-top terrace overlooking the straights. 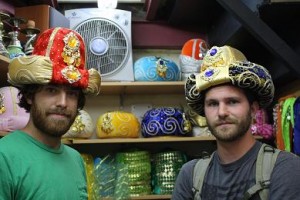 The next day we did a tour of the Palace overlooking the straights, which was unbelievably beautiful. However, we saw a few artifacts in the “treasury” that were a bit questionable. A hair from Muhammad’s beard, as well as one of his teeth. A sword from the prophet Daniel, and an arm (encased in gold) from the prophet John. Also swords from various other prophets (whom I didn’t know were armed) and various artifacts from the dome of the rock (which I didn’t know was that small) and a sundry other things that left us shaking our heads in wonderment and disbelief. We walked out and turned to one another and laughed. The highlight had been the staff of Moses, made of wood, that has somehow survived to this day. We probably missed out, but we skipped the harem, which they were charging an extra 15TL to see.

Our first few days in Istanbul were magical and flew by quickly, but it had been a while since we had been in a city, and we were shocked by the amount of people in the city and the craziness of the traffic.

3 thoughts on “Welcome to Istanbul, Friend”