Where the Wild Things Are Under the Bed

First it was blood worms. At least that’s what I nick-named the bright red worms who crawl out of the shower drain whenever the drain cover is removed for a shower. A search online revealed that there is already something called a blood worm, and it has nothing to do with Beijing’s horrible plumbing practices or the long worms that emanate from the drains in our bathroom. Still, they don’t do any harm so we share the bathroom with them and in return they clean the grout. Not a bad trade off. By the way, as far as I can tell the worm is a regular compost-style worm but when they live in water they turn red. That might be BS because I got it off the internet. I’m not too interested in doing further worm research. 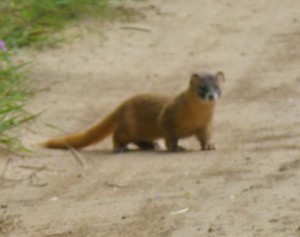 Last autumn we noticed a new scratching noise above our heads. Somehow a creature had worked it’s way inside our roof, but not quite into the house. We debated what the creature could be for a long time. We named it “Chuck” and when he didn’t who up for a few nights in a row we would worry about Chuck’s safety. It turns out Chuck was a feral ferret, or more appropriately a common Siberian golden weasel. They infest the entire area of Beijing…. infest it with cuteness!  We hate to be greedy, but eventually Chuck got so loud that we couldn’t sleep at night, so we bought chicken wire and climbed up on our hutong roof and blocked poor Chuck’s entry into the house. No more Chuck, though I hope he is doing well and has infiltrated someone else’s ceiling. 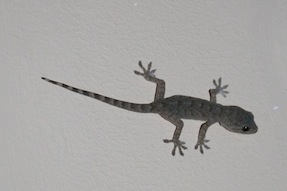 Next it was the geckos. These guys are pretty cute. So cute in fact that I wish they would stay out of the house because our two little cats are enjoying their first crack at real hunting going after these guys. The geckos are about five to seven inches long as adults, and the size of a postage stamp as infants. They can really crawl quickly. A few weeks ago I watched an outdoor gecko of the same variety attack a giant centipede. The centipede quickly coiled into a ball and flung it’s mighty tail at the gecko, who didn’t let go but furiously flung it’s head left and right. It lost grip on the centipede who scurried into a hole, but the battle was epic while it lasted. On another occasion Gremlin (our cat) caught a gecko and it detached from its tail, leaving the tail to distract the fascinated cat while the rest of the body scampered up the wall and out of reach.

Which brings me to the centipedes and millipedes. These guys are not really welcome, and were the first creatures to get the boot from the house. When we find one, it’s Mike’s lucky job to toss it out of the house before the cats get a hold of it. I’ve read that some centipedes are quite poisonous. They haven’t managed to climb up the walls at all, so at least they are confined to the floor. We keep finding them near the cat food bowls. Not a smart move on the part of the centipede. When the cats do find them, they poke at them but generally are not interested in a quick meal. 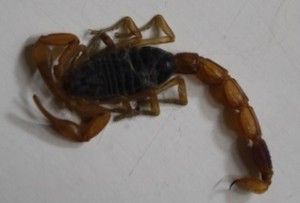 Finally this morning we had our most recent house guest, the common yellow scorpion. When I found him I was barefoot rummaging under the bed for our extra blankets. Out of the corner of my eye I saw a shape that registers the flight impulse. So I flew out of the room. Mike came in with a bucket and turned it over the scorpion. Later, he discovered it was already dead. Another causality of the cats, it seems.

So after two years of living in a Beijing hutong, these are the only guests we’ve had. Not bad considering other people have reported cockroaches, ants and rats.

2 thoughts on “Where the Wild Things Are Under the Bed”