Why I Hate Wal-Mart and the ‘temporary culture’ of America 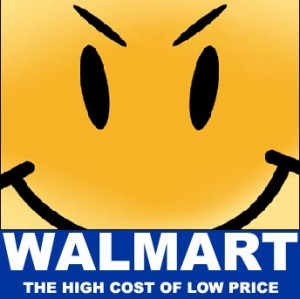 You can’t consider yourself a long-term thinker if you shop at Wal-Mart, Best Buy, or any other major chain in the United States. Here is why: they outsource. Simply put, we get products for cheaper but in the end more folks here will be unemployed which will result in fewer purchases long term. Folks at these major corporations have to realize they are simply sucking as many greenbacks as possible out of the economy while it lasts. An entire economy based on service industries is hardly a stable one, but that is where we seem to be heading.

So, why do I take it out on Wal-Mart? Honestly, it isn’t really fair. Wal-Mart is just a prime example because they sell the largest range of crappy products on the market, stretching from crappy sewing machines to crappy electronics to crappy plastic toys to crappy, low-quality clothing. This isn’t much different from most other major corporations, but this one is more prevalent. Its like blaming McDonald’s for all fast-food woes.

Yesterday I was looking at a piece of antique furniture. Unless doused in gasoline or saturated in water, this thing will be around long after I am. Something about that is much more comforting than looking at the $20 Ikea equivalent. Our culture demands things for cheaper and cheaper, and when a deal is good we’ll buy the product even if we’re fully aware it is sup par. We seem more than happy to accept that an item has a shelf-life. I’d much prefer to buy something once and have it for life. My life, not the life span attributed to it because it will whither away on its own accord over time.

I remember the day I returned to the USA having spent several years in Germany as a child. We got away from the airport in our rental car and I asked my dad why all the houses were made out of cardboard. An astute observation for a child, I have to say. It turns out it isn’t cardboard, but 2×4 pine boards with a bit of drywall and nails. The shelf life of a home in the USA is under 50 years, and this seems downright sad. Mike and I recently worked with Habitat for Humanity down in Texas and were shocked at the minimal amount that actually goes into making a house. Once you see the process from A to Z you start to wonder how the thing lasts even 50 years. Meanwhile, in Germany homes are built to last several generations. They can spend the additional money to make it correctly and make it sturdy because no one family is supporting the entire weight of the bill. If America were to start to make better homes, it would have to change the underlying cultural trends wherein children leave the nest and move to an entirely new area.

This reminds me of a story my grandfather told me when I was younger. He said the US government brought in some German road engineers to teach them how to build long-lasting roads. The Germans dig way into the earth and layer with straw, sand, tar, cement, straw and much more over and over again for around 2 meters. When they finally slap on the last coat they have a product that can withstand extreme weight, weather and use. The Americans were impressed and started to mimic the German road-building method. Suddenly, construction was halted as a politician pointed out that all the road workers would eventually work themselves out of a job with these long-lasting roads. I don’t doubt the story is true, but I do doubt that we would work ourselves out of road jobs by making them right the first time.

I recently read that there are two types of belief systems- utilitarianism and deontology. The former type believes in the greatest good for the greatest number of people while the latter believes in personal rights, regardless of the outcome. Americans seem to be distinctly deontologists, and are concerned about the jobs of the workers over the long-term happiness and convenience of millions of Americans who would enjoy driving to work without dodging orange cones. I think this is interesting because I’d much prefer the roads to be done right, to the highest possible quality at a higher price tag now, and then save money and time down the road (ha ha, my first pun) on repairs. I also suggest this project as a sort of CCC type deal for our current unemployment solution.

I digressed from my anti Wal-Mart point, but the ideology underlining it is the same. I think long term we need to pay more for high-quality, lasting products from small businesses instead of buying the cheaper version that will wither away and need to be replaced. In short, I think the greatest good for the largest group of people in America would mean more jobs here, more high-quality, lasting products here, and building a country we’d be proud to show our grandkids, instead of delivering them one in need of massive repairs.