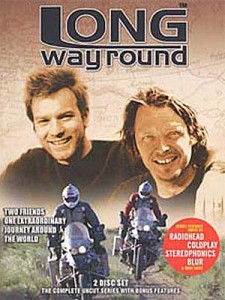 The Long Way Round

We recently watched the series Long Way Round

, where Charlie Boorman and Ewan McGregor ride their BMWs from London to New York– the long way around. They cover some 19,000 miles in around 3 months. This show was of interest to us because we recently completed the 2010 Mongol Rally, a charity ride from London to Ulaan Bataar, Mongolia. Ewan and Charlie did a strikingly similar route though much of the same territory, stopping at many of the same sites.

Charlie and Ewan set up an office in London several months prior to their departure and hired a small staff to help plan their route, get the necessary paperwork, consult with them on border crossings, and many more activities, like writing and disseminating sponsorship proposals and calling companies for donations. These were all activities we undertook for the Mongol Rally, and oh how nice it would have been to have an office and a support crew to do so!

To train them before the ride, they hired a personal trainer. We did sit-ups in the basement. To prepare themselves for harsh border crossings they hired an ex-military safety guru to teach them basic evasion, combat training, weapons use and how to best deal with a hostage situation. We watched Steven Segal movies. To prepare for any unforeseen medical problems, a doctor was brought on board. We had several boxes of band-aids and a suitcase of pepto. To learn Russian prior to departure they hired a Russian area consultant, a visa advisor and a language coach. We got an language book off Amazon and read the history of Russia. To fund the trip, they had a room full of women sending out proposals and a celebrity actor pleading for kit. We had a proposal we made ourselves and sent to everyone we could think of– and they promptly laughed in our faces. Needless to say, we’re jealous of their support crew. 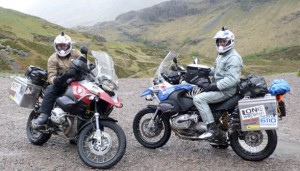 They rode a nearly identical route from London to the Ukraine as we did, passing through the Czech Republic just as we did, and stopping at the Church of Bones, which we routed ourselves out of the way to see. Along the way they had various monuments and tours cleared for themselves and the support and video crews, and his two-van support team went ahead at most border crossings and at major sites to arrange visits, viewings and make for easy passage. A lot of what they saw would not have been possible without the support crews, and yet without Ewan on the team it wouldn’t have been a TV series at all.

The show itself is inspiring and lively, and gets me eager for our next self-guided adventure travel or rally. Its hard to watch a show like this one that makes travel look so dangerous, difficult and unattainable without a whole crew behind you and then realize that with a bit of real-world thinking and prior experience you could undertake the same trip as they did, and I’m sure people have.

diss I’m not trying to the Ewan-Charlie team, as I think they have something special and love what they are doing. I just think it is sad that it takes a celebrity on a team to get publicity for it. A lot of great travelers are doing equally amazing trips and because they arn’t A-listed stars they don’t get sponsorship, recognition or free gear, and the trips don’t get publicized so that most people think travel is this dangerous and relatively pointless activity.